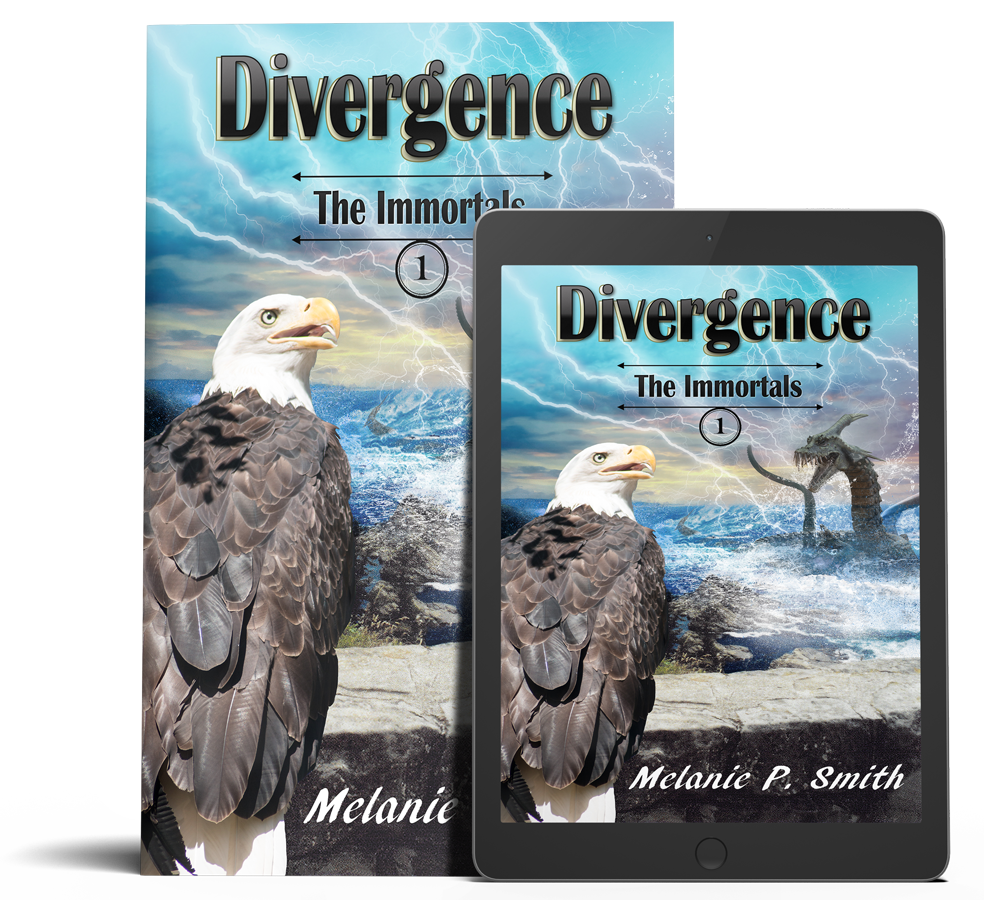 The gathering has begun. Six demigods embark on an epic journey of danger, mystical creatures, dark magic, and intrigue. When an ancient prophesy is triggered, the tale of six powerful immortals begins. Legend has it, the chosen six will triumph over evil and restore peace. But first, they must gather together and converge on the land where their parents were defeated. Time is running out, the Titans want revenge, and the future of the entire world is at stake.

Meet the immortals -The wiccan, the shifter, the Master of Water, the siren, the healer, the Reader of Minds. Their destiny awaits — if they accept their fate and unite to confront a dangerous enemy in the battle of a lifetime.

Beckett stood behind his desk, staring into the unsettled darkness.  A storm was raging, a violent, tumultuous exhibit of Mother Nature’s strength and vengeance.  He should be working, but he was feeling restless.  Energy seemed to pulse through him in waves tonight making him edgy and agitated.  He couldn’t concentrate, and the weather wasn’t helping.  The unease, the force that surrounded him, seemed to vibrate throughout the entire room.  The invisible wave continued to pulse and build exponentially until it felt like a living being.  He watched in fascination as the storm outside grew and strengthened into something even more dangerous.  The wind intensified and the rain pelted like angry bullets against the window; a vital but thin barrier that separated Beckett from the chaos that swirled just out of reach.  It felt surreal somehow, something Hollywood would conjure for entertainment.  He half expected an ominous monster to solidify and fling itself out of the bright lightning before it attacked some innocent human frantically running down the sidewalk looking for cover.  Now, he was being ridiculous.  Beckett shook his head in disbelief.  He wasn’t a fanciful man... never had been.  He was refined and grounded... a sophisticated professional to the core.  So, what brought on such a vivid and whimsical illusion?  Boredom?

He glanced at his desk, at the enormous pile of work waiting for his attention and frowned.  He should get back to that... but he knew he wouldn’t.  His mind — his body — was too energized to sit quietly behind the desk and tackle menial paperwork.  His gaze shifted once again to the ominous black cityscape.  Lightning struck nearby, illuminating an otherwise dark and menacing skyline.  The storm fascinated him, gripped his attention in a way few things had in his lifetime.  It felt like he was in a trance… mesmerized, captivated, and confused.  He continued to stand there frozen in place; to observe and to wonder as he watched the bright flashes of light; and listened to the deep rumbling thunder echo throughout the room — and the city below.  Yet, somehow, he still heard the soft footsteps of his one and only true friend when he stepped into the dimly lit room.  Beckett didn’t turn, didn’t move, he simply waited for Zander to silently make his way to the window.

“We have to leave,” Zander announced.

Now, Beckett did look up.  His right-hand man and best friend’s voice held more than a hint of urgency.  Zander was usually calm and collected, a trait Beckett envied.  “I still have at least an hour, maybe two...”

“Leave it,” Zander gave his friend— his brother — a gentle shove.  “Hurry, into the private elevator.  We need to go.”  He reached down, snatched up Beckett’s long business coat and briefcase; then, he half pushed, half followed Beckett to a small opening at the far side of the massive room.

Beckett barely had time to secure the door that separated his workspace from the tiny alcove, when five men burst into the office.  Five men that looked as though they had just pulled off a successful prison break and were now looking for trouble.

“Who are they?” Beckett asked, studying the security screen before him.  “I don’t know them.  What do they want?”  The leader stepped forward and angrily slid his arms across Beckett’s desk in frustration.  Papers fluttered then scattered over the lush carpet.  The man exuded darkness — In every way, Beckett decided.  He had long black hair that was slicked back into a ponytail, coal black eyes, and a long, leather duster that billowed when he turned — black as well.  Of course.

“No time,” Zander practically shoved Beckett into the opulent elevator.  “I’ll explain later.”  He punched a button and waited impatiently for the small car to slowly make its way toward the parking garage.

“I’m in the basement, you know that,” Beckett grumbled — Annoyed his friend was doing the pushing.  Beckett wasn’t used to taking orders, not even from Zander.  “What do they want?” Beckett demanded, again.

“You,” Zander said soberly.  He impatiently shifted on his feet, swaying slightly to the left, the right, then back to the left as he watched the numbers grow smaller on the display.  Finally!  The elevator beeped, and the sturdy metal doors slid open.  Zander didn’t wait, he gave Beckett’s back a shove, then motioned to the armed guards that were waiting next to a sleek black vehicle with tinted windows.

“Me?” Beckett asked in confusion.  “Zander, what’s going on?” Beckett demanded just before the two guards flanked him, each grabbed an elbow and forcefully ushered him to the strange vehicle.  Initially, Beckett was too stunned to resist; but he regained his composure quickly and refused to comply when one of the men flung open the backdoor and motioned for Beckett to climb inside.  He shifted, believing his friend was directly behind him but realized, almost instantly, Zander was still standing next to the elevator.

“Get him to Ashur’s,” Zander ordered.  “Route Bravo and watch your back.”

“Wait?  What?” Beckett began before two men shoved him into the backseat and started to close the door.  “You’re not coming with me?”

“I’ll meet you there,” Zander called out.  He watched one of the men slam Beckett’s door before he jumped into the passenger seat.  The car sped away, catching air momentarily as it flew over the ramp that led to the highway, then disappeared.  Zander just hoped they would make it in time.